Watch: Here’s What Bharosa Cell in Pune is Doing to Help Senior Citizens

The Idea Behind Bharosa Cell

Bharosa Cell was set up by the Police Commissionerate of Pune in 2017 to help older adults, women, and children with the various problems they face in their daily lives. The cell was inaugurated by former CM of Maharashtra, Mr. Devendra Fadnavis.

Bharosa means trust and the police officers of Bharosa Cell have worked hard to earn the trust of the public. The idea of Bharosa Cell culminated when the police started getting an inordinate amount of complaints against abuse and crime against the most marginalized section of the society – women, children and older adults. Many times, these people are not willing to lodge complaints against their family and sometimes, there are issues that can be sorted out by counseling alone. To deal with such cases, Bharosa Cell was established. The cell works towards the rehabilitation, support, and restoration of the normal life of these people in association with various NGOs and local bodies across the city.

According to a study, 1 in 4 older adults in India faces abuse. There are various types of abuse like physical abuse, mental torture, misbehaviour, bad treatment, harassment, assault, restriction of social life, etc. In many cases, older adults face loneliness and just want to talk to someone. 7% of Indian older adults suffer from depression and need counseling as well. There are telephonic counseling centres in India that specialize in dealing with the issues of older adults.

As the cases of domestic abuse and other forms of abuse and neglect against older adults started rising, Bharosa Cell launched its Senior Citizen Helpline number 1090. They began to undertake telephonic counseling as well. Ms. Chandgude said that for their outstanding performance in solving the cases related to older adults, her division received the FICCI Award in 2018.

She further mentioned that the Bharosa Cell not only helps in counseling but also helps older adults file applications, FIRs against their abusers, and legal assistance wherever needed. There are a couple of lawyers on the panel who work to provide their services to the elderly. Ms. Chandgude said that all these services are completely free so that any older adult, irrespective of their financial background, could access them.

Crime against Seniors in Pune

Next, we asked her about what types of crime older adults in Pune come across. She said that mental and physical abuse by close relatives are the most common complaints seniors have. They are often beaten, neglected or not given access to their basic needs like food. In some cases, they are not allowed to leave the house. Most of these cases are due to property disputes. Apart from these, older adults also face various niggles in daily life due to the people they come in contact with, like shop owners/salespersons, auto-rickshaw drivers, telephone or light companies, neighbours, etc.

In cases of extreme abuse, the older adults are encouraged to lodge a complaint against the abuser. However, in most cases, Ms. Chandgude said that they call all the people involved and counsel them. Counselling works in most cases and the older adults are given the respect they deserve. In some cases, Ms. Chandgude said that they pay home visits and talk to the offending person and sort out things.

NGOs have always played a major role in rehabilitating and re-homing older adults. They have a better connection with the people, some of whom might feel intimidated to approach the police directly. NGOs like HelpAge India provide medical and legal assistance to the elderly pan-India.

Realizing the growing need for a secure space for senior citizens, some builders are now coming up with assisted senior spaces for the elderly. These apartments are where the elderly can spend their twilight years in similar company and live a life of dignity and security. Athashri, a project by Paranjape schemes is one such project across various places in India where seniors are moving in and living happily.

Ms. Chandgude said that apart from Athashri, NGOs like Janaseva Foundation, HelpAge India, FESCOM and connecting.com worked in coordination with Bharosa Cell. There are old age homes like Janaseva Foundation’s Punyadham or Nivara where the cell sends homeless older adults. These NGOs and Bharosa Cell together form a tight bond and try to rescue as many distressed seniors as possible.

Bharosa Cell pays frequent home visits to senior citizens and also old age homes to ensure that all is well with them. They also try to spread awareness through programs and dramas organized during Ganeshotsav in Pune. Through these awareness programs, they also give security tips to older adults to ensure that they are safer and happier.

Also Read: Laws that Protect Elderly Against Abuse in India 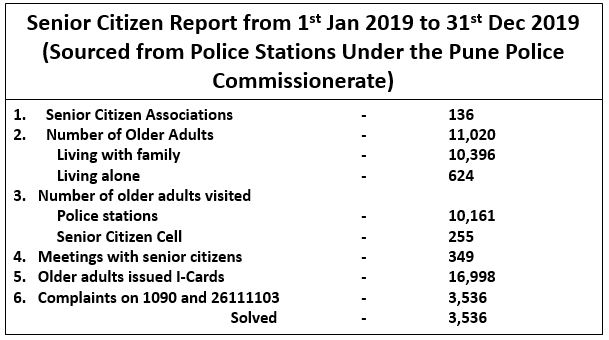 Ms. Chandgude also mentioned that in 2019, more than 11,000 older adults contacted the police on some matter or the other. Apart from these, the police and Bharosa Cell paid home visits to more than 10,400 seniors. She also said that the Bharosa Cell received 3,536 complaints on 1090 and they have resolved all those complaints.

The Pune Police has issued an identity card to 16,998 senior citizens. These cards contain important information like the name of the person along with his address, phone number, emergency contact numbers, doctor’s number and the helpline number of Bharosa Cell, 1090. These cards are immensely helpful for older adults in a time of crisis. Anyone can help them get medical or any other aid any time.

There are nodal officers and a special police inspector present in every police station in Pune to address the issues of older adults. These officers are in close contact with the senior citizen associations that fall under the coverage of their branch. There are 136 senior citizen associations in Pune. These associations, in turn, are fully aware of the number of older adults in their area and the issues that they face on a day-to-day basis. With such a close net, Bharosa Cell ensures that the maximum older adults are covered.

Message for the Caregivers

Ms. Chandgude shared a message to the caregivers who are the children and grandchildren in most cases. She said that the older adults have sacrificed a lot of their time, energy and desires to bring up their children. It is the turn of the children now to take care of them. Little things like consulting them before making a decision can go a long way in making them feel loved. Many older adults feel neglected and isolated. To overcome this issue, they start gossiping with others. Such gossiping leads to fights and creates a bad atmosphere at home. Instead, including them in your activities and talks can reduce such bad things from happening. “Let’s hope to make Pune a better place for older adults,” Ms. Chandgude adds.